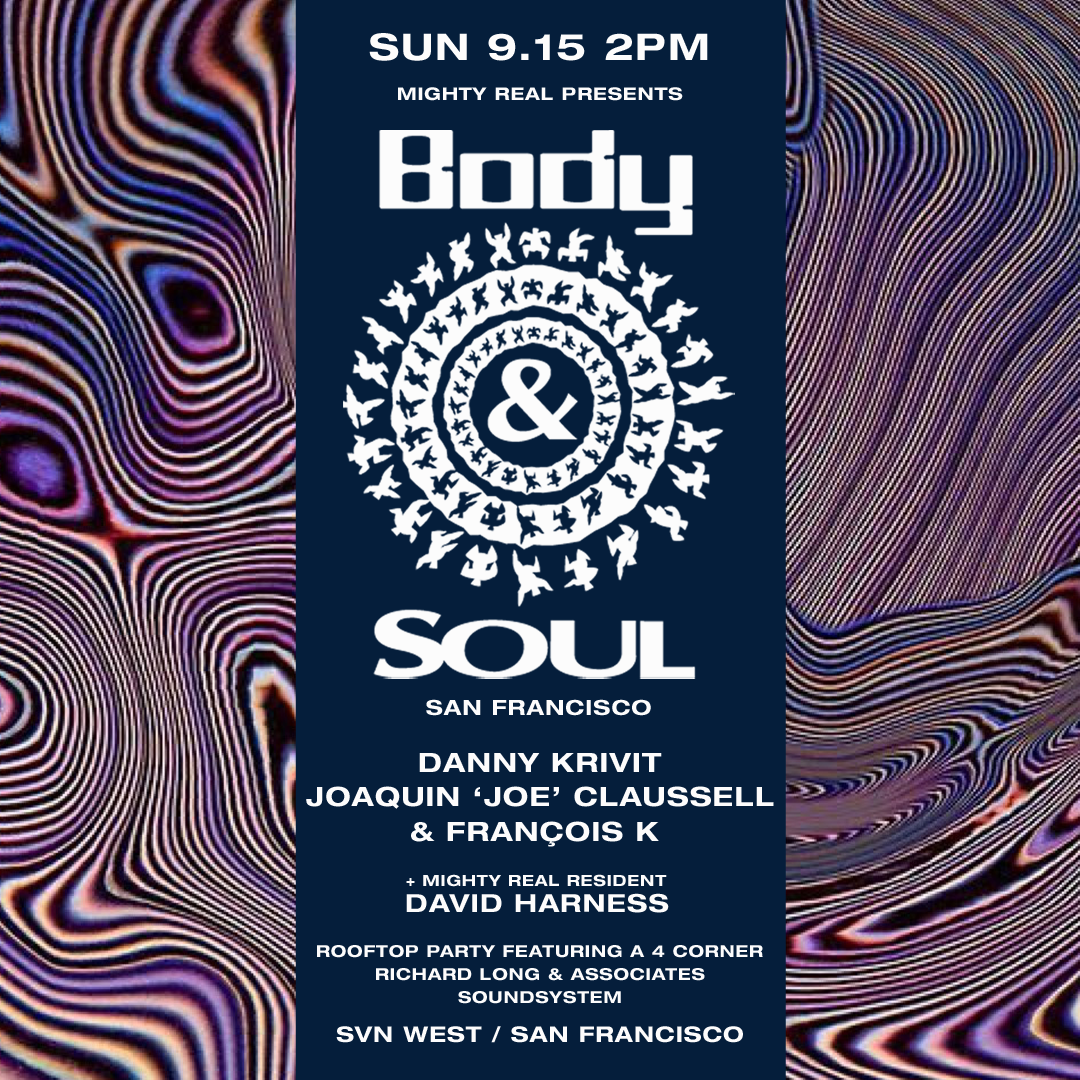 Click HERE for tickets
Mighty Real presents Body & SOUL w/ Danny Krivit, Joaquin ‘Joe’ Claussell & François K.
Sunday, September 15th, on the rooftop of SVN WEST in San Francisco – Mighty Real presents Body & SOUL w/ Danny Krivit, Joaquin ‘Joe’ Claussell & François K. + Mighty Real resident David Harness & MORE. Featuring a 4 corner fully refurbished Richard Long & Associates Soundsystem. The former soundsystem of Mighty & Townsend in San Francisco, as well as Paradise Garage in NYC.
DANNY KRIVIT SPOTIFY
JOE CLAUSSELL SPOTIFY
FRANÇOIS K. SPOTIFY
DAVID HARNESS SPOTIFY
Music brings us together. Body & SOUL is here because of Music; Music we love, Music we share. Music that can touch us in the most intimate way.Since the early 70’s, there have always been parties in the city where people got together and danced in a safe and congenial atmosphere. Where friends were made and where our love for Music could be celebrated. Where you felt special for being part of it, yet at home enough to truly relax and let go on the dance floor, together. Some of those parties became legends, others by now long forgotten…… but the need is still here today for the same basic setting.
Body & SOUL was founded in 1996 by François K. and John Davis. The Sunday afternoon party, which took place at Club Vinyl in New York’s Tribeca area, soon became one of New York’s most revered weekly parties. The three DJs, Danny Krivit, Joaquin ‘Joe’ Claussell and François K. delivered a unique soulful mix of very organic and spiritual dance music grooves, and became standard-bearers for New York house. On any given Sunday at Body & SOUL, people from all walks of life, all ages, all races, raised their hands in the air and gave thanks for the unifying force that brought them back week after week: the music.
A little history on Danny, Joe & François.
Danny Krivit’s DJ career began at the Loft in NY, a mecca for DJs starting in the 70’s. There, he began a long term collaboration with Larry Levan and François K. DJing for over 40 years. Danny has an impressive knowledge in rare disco, funk, soul and jazz and known as the “King of the Re-edit”, a technique that he pioneered in the early 80’s. He has produced, edited & mixed well over 400 records, along with holding down his NYC award-winning 718 Sessions event, now in its 10th year.
Joaquin ‘Joe’ Claussell is one of New York’s highly respected dance figures, for his work as a DJ, producer, and remixer, as well as for his label Spiritual Life Music, all of which reflect his deep love for and his eclectic and multicultural taste in dance music. Much of the global dance movement can be traced back to Claussell’s highly percussive style that incorporates Latin, African, Brazilian and other world rhythms with elements of jazz, rock, disco, and live instrumentation.
François K.’s career in dance and electronic music goes back to the late 70’s in the New York clubs and at the disco label Prelude. He mixed loads of records on the European electro/new wave scene in the 80’s and started his Wave Music label in the 90’s. He has worked his mixing magic on about 1000 records to date and as a DJ and a producer is now exploring the dub and techno sides of electronic music.